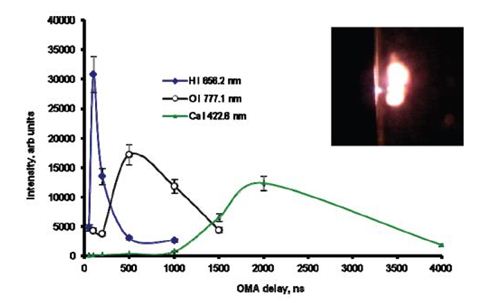 A time-resolved orthogonal double pulse laser-induced breakdown spectroscopy (LIBS) with helium surrounding gas is developed for the explicit demonstration of time mismatch between the passage of fast moving impurity hydrogen atoms and the formation of thermal shock wave plasma generated by the relatively slow moving major host atoms of much greater masses ablated from the same sample. Although this so-called “mismatching effect” has been consistently shown to be responsible for the gas pressure induced intensity diminution of hydrogen emission in a number of LIBS measurements using different ambient gases, its explicit demonstration has yet to be reported. The previously reported helium assisted excitation process has made possible the use of surrounding helium gas in our experimental set-up for showing that the ablated hydrogen atoms indeed move faster than the simultaneously ablated much heavier major host atoms as signaled by the earlier H emission in the helium plasma generated by a separate laser prior to the laser ablation. This conclusion is further substantiated by the observed dominant distribution of H atoms in the forward cone-shaped target plasma.