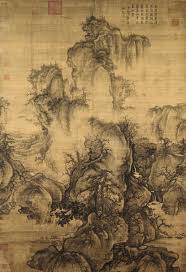 The Chinese and other traditions, paintings are executed on long paper or silk scrolls. On display, those artworks may be plagues by qi-wa, a curling up of the side edges that can tear fibers and dislodge pigment. Many analyses to date of qi-wa have focused on such factors as environment humidity or the glue used to affix a painting to its mounting. But a group of Taiwanese physicists and conservationists led by Tzay-Ming Hong of National Tsing Hua University has shown that qi-wa can be explained by a physical mechanism put into play when the art is rolled up for storage.

Rolling compresses the inner, painted face of the scroll in the long direction and scratches the outer face. When the scroll is removed from storage, the strain relaxes. As a result of the Poisson effect, the art face gets compressed in the transverse direction, the back face is stretched, and the scroll curls along its side. Ultimately, the amount of curling is determined by the scroll’s seeking to minimize its total stretching energy and thus is a function of various stretching moduli of the mounted artwork.

Hong and company’s analysis is applicable to thin sheets generally and suggests specific strategies for minimizing qi-wa. For example, the researchers recommend aligning the fibers of the mounting paper parallel to the long direction of the artwork, a procedure carried out in traditional Japanese practice but contrary to Chinese custom. (M.-H. Chou et al., Phys. Rev. Lett. 112, 034302, 2014).